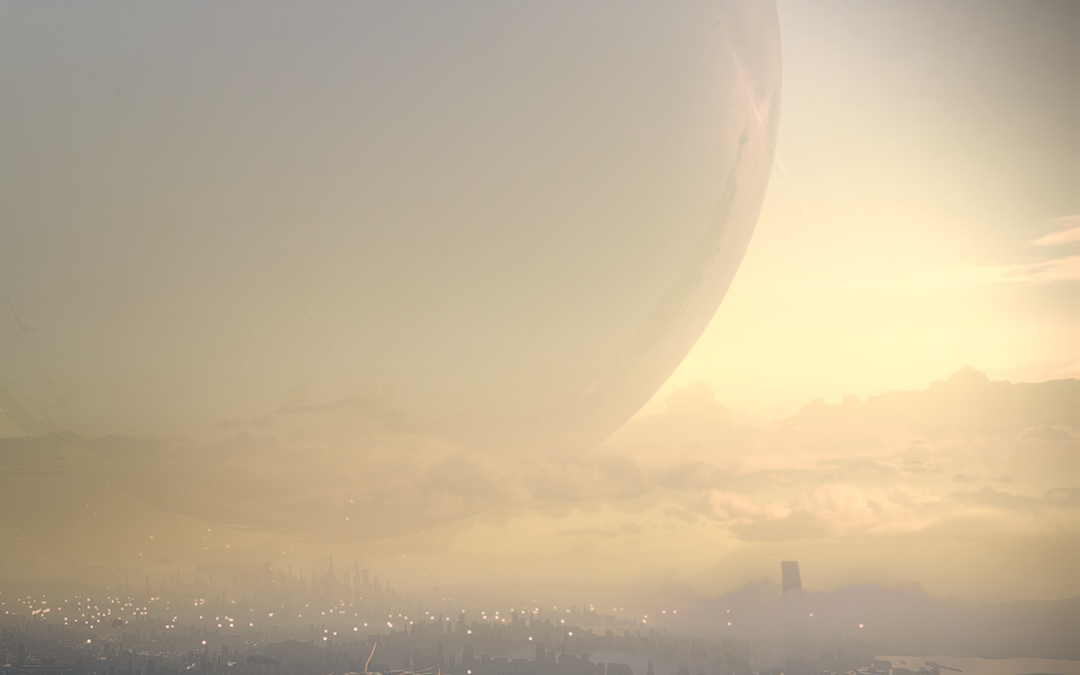 Two Eliksni crouch near a space-heater in their half-ruined district of humanity’s Last City. They have a concrete ceiling over their heads but only two walls, forming a tiled corner at the outer edge of a broken building. They are inside and outside, indoors and outdoors, at the same time. They can see the Traveler low in the sky, through the gaps in their outdoor room, above the intersection nearby.

Streetlights flicker and doubt in the early evening. Bands of glow-tape and a few light-up filaments in the shape of human words and symbols turn the street many hues in the shadow of the Traveler. These lamps and lights were all discarded and broken when these Eliksni moved into the Last City, but technicians repaired the lights and the power supplies and artisans put out glow-tape in pleasing patterns reminiscent of Eliksni street art. The tape is as much a street sign as a mark of territory for the House of Light.

It’s at dusk, like this, that the street gets its last flurry of activity before settling in for quiet nights—sometimes quietly cozy, sometimes hushed and tense. Many humans in the city skirt the Eliksni district by day but avoid it by night. Most of the humans on the street here now are in a hurry to be elsewhere.

The two crouched Eliksni in the half-room talk about the passersby to practice their human languages. They talk rumors and they gossip and sometimes they make up tales about the humans they see, but they always admit what they’ve made up, as part of the imaginative game they play.

One Eliksni, short an arm and an eye from time spent on Europa, nods toward a figure in white armor and cloth, adorned with dark scales and ropes for decoration. He says, “See that one? That Guardian over there? She brings us bone broth and noodles sometimes. Dumplings, too, which are delicious even though, I think, they are the food of trash-pickers and garbage-scowl pilots? I’m not certainly sure.”

The Guardian in question is heading their way, up the street at a slow pace, looking up at the buildings and down at the pavement as she goes. No rush.

The other Eliksni, who wears bright-green camouflage they brought with them from Venus when they joined the House of Light, picks at a mandible with her finger, then tilts her head in thought. “Bone broth,” she says. “With noodles?”

“Ramen,” says the Venusian, practicing the word. “What is that she is holding?”

They both squint at the Guardian. At the metal box she carries under one arm. It’s a long, thin box. It is marked with human words that neither of these Eliksni know. As they watch, the Guardian approaches a group of Eliksni at the intersection, gathered around a public table on the path. The Guardian talks with the gathered Eliksni for a while. Elders, all.

“She is an Exo. They say she was rebooted many times,” says the first Eliksni. “Perhaps too many times.”

“Does the Light help that?” The second Eliksni replies.

As they watch, the Guardian’s Ghost appears in a swirl of misting light. The Ghost resembles a child’s building toy of metal spokes and multi-pronged hubs and joints.

“I know that look,” the second Eliksni whispers. “Warmind.”

“She is an agent of the Bray,” the first muses. “She is trading for parts to rebuild Human Golden Age ships. But,” he turns to confide in his cohort, “I made that up, I think.”

The Guardian, then, sets the package she brought onto the public table and opens it. The elder Eliksni there coo and twitter with intrigue as they look inside.

Still, both Eliksni join the group gathering around the Guardian’s metal crate and peering inside. What’s inside is confounding. Pieces of plastic and slabs of timber or wood, decorated in angular patterns, circles, and grids. The baubles inside are cubes, cones, triangles, and blobs—so many shapes! Some resemble beads, others look like dismantled tech.

“What is this?” The second asks no one in particular, pointing at one of the wooden slabs.

“Games,” the Guardian says. “That one is backgammon.”

“Back Gammon,” she replies, practicing the sounds.

An elder Eliksni picks up one of the plastic shapes and clicks inquisitively.

“That’s part of the game called chess,” the Guardian says. “That piece is called the Queen.”

A wave of nods ebbs through the gathered Eliksni.

“The recording in the box can show you how to play,” the Guardian says. “But since I’m here, I can teach one of these games right now. Maybe backgammon?” The Guardian looks at the second Eliksni in her green camouflage.

“Yes and please,” the Eliksni replies.

“Great,” says the Guardian. “Who else wants to play?”

A dozen Eliksni hands go up.